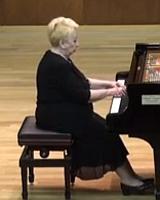 Ludmila Zeltser is the native of the former Soviet Union. She graduated from the Stoliarsky Special Music School for gifted children in Odessa and later from the Kazakhstan State Academy of Music, where she studied with Professor Eva Kogan, an alumnus of the legendary Russian pianist Grigory Ginzburg. Later on, Ms. Zeltser took up advanced studies with Professor Bella Davidovich at the Moscow Tchaikovsky Conservatory. While still a Conservatory student, she won a top prize at the Central Asia Piano Competition and thereafter was invited to join the piano faculty at the National Academy of Music in the Kazakhstan’s capital, Almaty.

Ludmila Zeltser served as a piano professor for 25 years and appeared as a soloist, chamber musician, and concerto soloist all over the former Soviet Union. Her graduates successfully work in Kazakhstan Russia, United States, Australia, Germany, Greece, and Israel.