Music Education Forum - A Lecture by Dr. Beth Bolton | The Jerusalem Academy of Music and Dance
Skip to main content 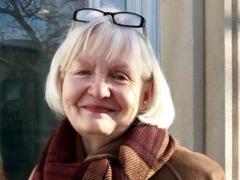 Beth is a member of the faculty of the Gordon Institute for Music Learning in the United States. She frequently teaches early childhood music and elementary general music university courses based on music learning theory and co-sponsored by the Gordon Institute. She has served as a featured presenter at universities, conservatories, workshops, and conferences throughout the United States, and in Australia, Belgium, Brazil, China, Cyprus, the Dominican Republic, Germany, Israel, Italy, Japan, Lithuania, Korea, New Zealand, Portugal, Singapore, and Spain. She teaches annually in Spain and Italy in early childhood music Level 1 and 2 courses offered by Musica in Culla. Dr. Bolton is the honorary president of Musica in Culla (Music in the Crib), an international organization of early childhood music associations in Italy and Spain.

Prior to doctoral studies at Temple University with Edwin Gordon, Beth was an elementary general music teacher for 15 years. Upon serving as videographer for Wendy Hicks Valerio’s landmark dissertation study with infants and toddlers, “An Investigation of the Initial Stages of Preparatory Audiation” (1992), Beth became deeply interested in early childhood music. She taught early childhood music classes with Edwin Gordon during his last few years at Temple University, and for many years she continued teaching very young children at Temple Music Prep and Bryn Mawr Presbyterian Church, near Philadelphia. Currently, she focuses on observing children’s music responses as she sings, moves, and plays with her 8 grandchildren (ages 9 months to 20 years) in “The Grandma Lab.” Most recently she has begun a systematic observation of music learning theory based early childhood music classes in several locations in Europe.

Beth is deeply interested in the work of Lev Vygotsky, Daniel Stern, Maria Montessori, and Edwin Gordon, and in using ideas prominent in each of their practices to observe very young children as they respond to music.

Dr. Bolton is a senior author of Jump Right In: The Music Curriculum (GIA), a music series for elementary general music teachers; and is a co-author of Music Play (GIA), a teacher guidebook for early childhood music which has been translated and published in Lithuania, Korea, and China.