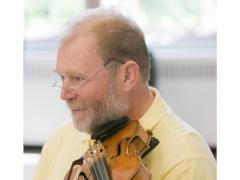 Yuri Gandelsman is professor of viola at the Michigan State University College of Music.

Gandelsman was born in Russia and studied in Moscow with professors Heinrich Talalyan and Valentin Berlinsky. After winning the National Viola Competition in 1980 and joining the Moscow Virtuosi Chamber Orchestra as principal violist and soloist, he became one of the USSR’s most sought-after musicians. His collaborations included concerts with renowned musicians including Sviatoslav Richter, Yevgeni Kissin, Vladimir Spivakov, the Borodin and the Shostakovitch quartets.

In 1990, Gandelsman became the principal violist with the Israel Philharmonic Orchestra (IPO). During the next 10 years he frequently performed as a soloist with the IPO under Maestro Zubin Mehta in Israel, the U.S., Luxembourg, Portugal, and Spain. Gandelsman has performed solo recitals in many parts of the world, including Moscow, St. Petersburg, Paris, Frankfurt, Tokyo, Warsaw, Istanbul, Budapest, and Florence. He has made numerous solo recordings for "Melodya," "Sony Classical," "Lyrinx," "ASV," and "Naxos" labels.

Upon his arrival in Israel, Gandelsman was appointed as a professor of viola at the Rubin Academy at Tel Aviv University, a position he held for 12 years. From 2000-02 he was the chairman of the Chamber Music Department at the university.

Many of Gandelsman's students hold positions in orchestras and chamber groups in Israel and Europe. His students have also been prizewinners at numerous international competitions. He has appeared as a guest professor at Yale University and the Paris Conservatoire. Gandelsman has given many master classes in Finland and during 1995 he was the director of the "Viola School" at the Kuhmo Festival. He has also taught and performed at several chamber music festivals in Europe, including the Pablo Casals, Verbier, Kuhmo, Portogruaro, and Savonlinna festivals.

In 2001 Gandelsman joined the Fine Arts Quartet, whose members are artists in residence at the University of Wisconsin-Milwaukee. With the quartet he performed more than 300 concerts worldwide and recorded numerous albums of chamber music by Dohnanyi, Glazunov, Beethoven, Mendelssohn, Bruckner, Frank, Faure, and Schumann.

For more than 12 years Gandelsman was professor of Viola in the Rubin Academy in Tel Aviv University and has appeared as a guest professor at Yale University and the Paris Conservatoire. In 2001 Gandelsman joined the Fine Arts Quartet, one of the most distinguished ensembles of today,whose members are artists in residence at the University of Wisconsin-Milwaukee. He retired from the quartet in June 2008.

In 2008, Yuri Gandelsman has been appointed a Professor of Viola at the Michigan State University College of Music. He plays a 1748 Paolo Testore viola.