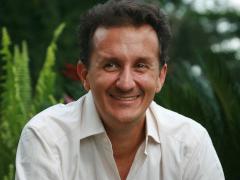 Carrick has presented concerts, master classes and lectures throughout the US, Europe, Israel, Rwanda, Japan, and South Korea, where he was a Korean Gugak Fellow in 2015. He currently serves as Chair of Composition at Berklee College and co-founder of Either/Or, with former faculty appointments at Columbia and New York Universities and as New York Philharmonic Teaching Artist.

Born in Paris of French-Algerian and British descent, Carrick received his BA from Columbia University, PhD from the University of California-San Diego, and pursued further studies at IRCAM and the Koninklijk Conservatorium.