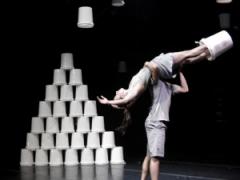 Participants:
Artistic Directors, Colette Krogol and Matt Reeves, natives of Florida, received their Bachelors of Fine Arts in Dance from the University of Florida. Upon graduating, they collectively began the vision and creation of Orange Grove Dance and moved themselves and the company to New York City. Their work has since been presented throughout the United States, Finland, and Iceland. Colette and Matt spent the 2011-2012 academic year as Visiting Lecturers/Guest Artists at the University of Florida’s School of Theatre and Dance. They have performed and toured nationally and internationally with many prestigious companies, such as Neta Dance Company, Dendy Dance Theater, Diavolo, David Dorfman, and The National Yiddish Theatre. Colette and Matt have taught workshops and master classes as well as set repertory across the United States and Europe. They were Artist in Residence in Nikiski, Alaska in 2008, and recently in Rauma, Finland as well as at Skriklaustur in East Iceland.  Their Dance-U-Mentary film, “Rauma in Motion” is currently on exhibition in Finland and their dance film, “ELta BLöð”, will premiere in Iceland this August.