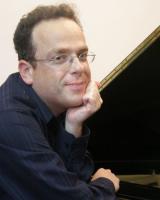 Dr. Ilan Levin, pianist.
Ilan Levin gave recitals, chamber music concerts and radio appearances in Israel, Holland, Poland, Hungary, Italy and the USA. He completed his MA and DMA at the Eastman School of Music where he studied under the guidance of Rebecca Penneys.
In Israel his teachers were Hana Shalgi and the late pianist Pnina Salzman. Ilan was a prizewinner of the Rubin Academy Piano Competition in 1993 and the Chautauqua International Piano Competition in 1998 and 2001. In 2002 he was a prizewinner of the SAI Concerto Competition in Chautauqua NY.

Ilan integrated well into the vivid musical scene of Rochester NY where he studied. He founded a concert series in one of Rochester’s landmarks – the Hervery Ely House where he collaborated with several of Rochester’s most prestigious musicians: the violinist Lynn Blakeskee, violist George Taylor, pianist Rebecca Penneys, mezzo soprano Kathryn Cowdrick and tenor Robert Swensen.

Ilan has served as a music faculty at Bucknell University and at Elizabethtown College. Ilan has joined the music faculty at the Jerusalem Academy of Music and Dance since his return to Israel at 2009.