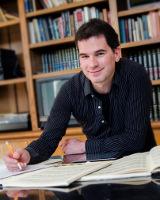 One of Israel's leading musicians, pianist Dr. Ron Regev has served until recently as the chairman of the piano department at the Jerusalem Academy of Music and Dance, and as staff pianist at the Steans Music Institute of the Ravinia Festival in Chicago. Dr. Regev, an avid chamber musician and recitalist, has performed Beethoven’s 32 piano sonatas in lecture-recitals in the 2017-2018 season; last season included, among recitals and chamber music concerts with leading Israeli and international musicians, concerts at the Chopin Festival in Jerusalem, where Mr. Regev performed as soloist with the Jerusalem Symphony Orchestra.

Dr. Regev coaches chamber music groups for the Jerusalem Music Center, and adjudicates local and international auditions and competitions. His students have won Israel's leading competitions. Dr. Regev is also active as a consultant to music technology companies, and is the programmer of Score Wizard, an advanced iPad app with the ability to display sheet music and turn pages automatically, just by listening to the performance through the device’s microphone.

Mr. Regev is a prizewinner of numerous  competitions, including the Tenth Rubinstein International Piano Master Competition, the American Scholarship Association Piano Competition in Cincinnati, the Bruce Hungerford Award in New York, the First Tbilisi Piano Competition in Georgia and others. He was a Fulbright grant recipient for his studies in the United States.

A student of Professor Emanuel Krasovsky, Mr. Regev completed his Bachelor of Music degree at the Samuel Rubin Israeli Academy of Music (Tel Aviv University) summa cum laude. He continued his studies at the Juilliard School in New York, where he received his Master of Music and Doctor of Musical Arts degrees, studying piano with Mr. Jerome Lowenthal and chamber music with Mr. Joseph Kalichstein, as well as serving as full faculty member. Mr. Regev's doctoral document, titled "Mendelssohn's Trio opus 49: A Study of the Composer's Change of Mind," won Juilliard's centennial year's Richard F. French Doctoral Prize for outstanding work on a doctoral document, and was the basis for a lecture and a recital at the Library of Congress.