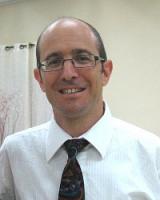 Dr. Yair Ehrlich received his B.Mus in Clarinet and Music theory, and his M.Mus in Conducting from the Jerusalem Academy of Music and Dance and the Hebrew University under the instruction of Prof. Ilan Schul, Mr. Aharon Harlap and Prof. Stanley Sperber.  During the course of his studies he received the Faculty Dean Prize for Conducting and Composition and received first prize in the Chamber Music Competition.

He completed his doctorate in Music Theory (in which he researched phrase rhythm in the sonatas of Scarlatti) in Bar-Ilan University under the instruction of Prof. Eytan Agmon.  He also conducted choirs, and in the years 2001-2003 he served as the musical director of the vocal ensemble "A Cappella Jerusalem". Today he spends his time teaching and researching tonal music, with a special emphasis on the relations between aspects of counterpoint, harmony and rhythm in music.