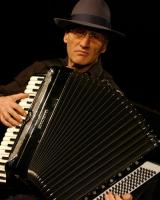 Emil was born in Kishinev in the Republic of Moldova.
- Began his studies of accordion at the age of 7.
- Graduated the Music High School and Music Academy in Kishinev in Accordion, Piano and Conducting.
- Played solo in different dance groups, chamber ensembles and folklore orchestras
in the former USSR and around the world, and recorded for radio and television in
Moldova.
- Until his arrival to Israel in 1990, he played in the National Folklore Ensemble "Mioritza” and “Jok”.
- Since 1994 Emil Aybinder has been the Musical Director of “Hora Jerusalem”.
- In 2000 he established the Accordion Department in the Jerusalem Academy of Music and Dance, and in 2001 created the Ensemble for Folklore Music of the Academy (“The Volcan Ensemble”), of which he is the conductor, arranger and soloist.
- He appears in solon recitals for Accordion and in chamber concerts in Israel and abroad.
- In 2002 Emil Aybinder won the Minister of Science, Culture and Sports Award for Music Performers ,given by the Prime Minister.