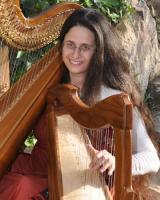 Harpist Gittit Boasson, one of Israel’s leading multidisciplinary musicians, performs music spanning from the middle ages to recent days, from classical to popular music, and teaches harp and music theory. She played in the major halls and concerts series in Israel, performing core solo harp repertoire, solo Israeli works, chamber music, and her own arrangements for harp and orchestra. Ten CDs have come out so far with her playing, including classical music (solo with orchestra, and chamber music), contemporary music, pop music and music for the theatre.

Gittit Boassonhas won the Prize of the Head of the Academy in Jerusalem in 1995, as well as first prizes in concerto and string instruments competitions over three consecutive years. She was a recipient of the AICF scholarships from 1987 ‘till 1995. She completed her B.Mus. degree in classical harp playing with distinction at the Jerusalem Academy of Music and Dance, under the guidance of Irena Kessler. She completed her M.Mus. degree in jazz harp with distinction at the same institute, guided by Mr. Ittai Rosenbaum and Mr. Yuval Cohen, a degree first of its kind in Israel, and among the first world-wide, supported by the Beatrice Cohen Fund. At present she completes a M.A. degree at the Musicology department of the Hebrew University in Jerusalem. Her thesis research deals with the transition from the Ashkenazi to the Sephardic accent in songs composed in Israel at the outset of the 20th century; she is guided by Prof. Naphtali Wagner. Her study was aided in 2012 by an excellence scholarship.​