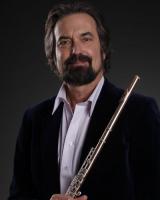 Highly acclaimed Israeli flautist Noam Buchman is Principal Flute of the Jerusalem Symphony Orchestra. As a soloist he has appeared in numerous concerts and recordings, both in Israel as well as in leading concert halls throughout Europe, North and South America. He plays and records with diverse chamber ensembles and is a founding member of the Israel Contemporary Players.

Noam Buchman has many CDs to his credit; these include, among other works, flute concertos by Nielsen, Ibert, Partos, Gronich and Ernest Bloch, as well as chamber music by Bach, Schubert, R. Strauss, Ben-Haim, Zehavi, Leef, Ran and Sheriff. His repertoire is a varied and rich offering of musical artistry that ranges from the Baroque and the Classical periods to the contemporary.
A significant part of Noam Buchman’s activity has been devoted to bringing Israeli music to the attention of a wider audience and many of the more prominent Israeli composers have dedicated their works to him. In recognition of his unique contribution in this area he was awarded the “Prize for Excellence in Performing Israeli Music” by the Arts and Culture Council of Israel, and the “Oedeon Partos Prize” by the Israeli Minister of Culture.