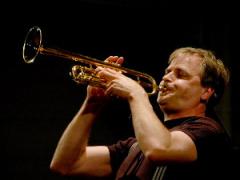 Jens Lindemann is a German born Canadian trumpet soloist. He is the first classical brass soloist to be awarded the Order of Canada, the country's highest civilian honour. He played in the Canadian Brass from 1996 to 2001 and continues to play at major concert venues all over the world as an orchestral soloist, with chamber groups, jazz bands, and also as a recitalist and masterclinician. Lindemann is a professor with high distinction at University of California, Los Angeles UCLA.

Lindemann studied at the Juilliard School of Music, McGill University, has received an honorary doctorate from McMaster University and is an honorary fellow of the Royal Conservatory of Music. Among numerous distinctions, he has been a nominee for a Grammy award and a Juno Award and received the Echo Klassik in Germany.