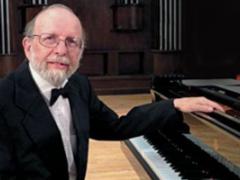 Jeffrey Jacob’s music has taken him all over the world. The concert pianist and music professor grew up with an instinctual love of classical musical from all periods and was playing the piano by age five. Now he performs 10 to 20 concerts per year and has released and contributed to 21 CDs.

Jacob has played for audiences from Hong Kong to Dublin and all over the U.S. Two of his most memorable performances were forays into Warsaw, Poland, before the fall of communism. “There was a big rush to bring Western music into these communist countries and to play there was wonderful,” he says, not to mention his visit to the home of Chopin where Jacob stood in front of the renowned composer’s piano.

Jacob himself has composed three symphonies, three piano concertos, and numerous works for piano and chamber ensemble. Jacob obtained his master’s degree at Juilliard and his PhD from the Peabody Conservatory at Johns Hopkins University.

Jacob’s accolades include reviews by The Washington Post and the Irish Times in Dublin, remarking on his “immense artistry” and calling him “one of the outstanding pianists of his generation.”

14/1/19 , 12:00-13:30:
Masterclass on compositions for piano solo for the students of the Cross disciplinary composition division