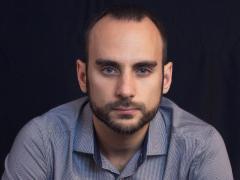 Nir Shor is an Israeli born Film and Video Game Composer, he studied music in a Musical college in Saint Petersburg Russia and continued his studies in “Rimon school of jazz and contemporary music” in Israel.
Exploring all aspects of music production led him to evolve into a multi instrumentalist and a mixing engineer with various credits.

Nir is best known for his work on “Eximius: Seize the Frontline” and “Batman: Master of Fear”, in addition Nir has been involved in the musical department of “Sundance Festival” selection documentary films “Try Harder” and “Prognosis”.
His online presence includes more than 2 million views on YouTube and more than 3.5 million  streams on Spotify as well as working with big YouTube channels, most notable is his work with “Corridor Digital” creating the soundtrack for one of their videos “Nerf Overwatch” which accumulated more than 5.5 million views worldwide.

Using state of the art VST Sample Libraries in combination with live recorded instruments with one of the most popular music creation software in the industry Nir Shor achieves new levels of realism and quality in digitally produced orchestral and electronic music, his extensive experience and diverse musical background has enabled him to compose in many different genres of music ranging from Medieval to Blues and from Symphonic Scores to Dubstep.