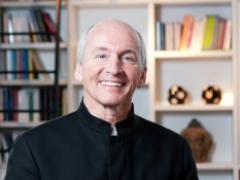 Marc Bogaerts was born in Belgium, lives in Berlin and is at home in the world. 10 years in New York are as much part of his artistic background as extensive  creative work in over 20 countries worldwide.. His life is a collection of fascinating personal experiences, which he not only can vividly recount in just the right moment, but that also often are the inspiration for his work.

Bogaerts is an early bird, who starts the day with a 20 km bike tour before having the first coffee. He combines this unique discipline and perseverance with creativity and curiosity. The choreographer-visionair not only surprises people by still being able to pull off more than one eighty push-ups any time, but especially through the determination it takes, to push oneself to the limit again and again.  Believing one should always look for a new mentor he takes not only his daily balletclass but is obsessed with the biomechanics of his own body.

When he stands in front of 200 performers, he has everyone’s undivided attention, communicating in five different languages simultaneously and mutually shaping a piece. He is one of the few temporary internationally renown choreographs, that can cover a broad artistic range, from experimentaly working with John Cage in Studio 54 in New-York until the Royal Danish Ballet and the Opening of ISTAF in the Olympic Stadion in Berlin

Everything that moves is Dance