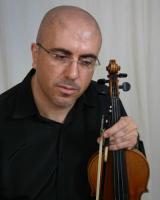 Khsheiboun, born in 1970 in Kfar Kana in the Galilee, received his Masters Degree in Violin Performance at the Faculty of Arts from the Academy of Music & Dance in Jerusalemwhere he graduated with honors.
In 1993 he founded the “Alfarabi” Orchestra . The orchestra is made of authentic Arabic instruments and performs Oriental music in general and Arabic music in particular.   Mr.  Khsheiboun  is the orchestra's conductor and solo violinist.  He is also the music director and solo violinist of the “Trio Alfarabi” which  performs throughout Israel and abroad, serving as a musical ambassador for Eastern Music repertoire.  He writes and arranges compositions for both ensembles.
Khsheiboun served as the National Director of Music for the Ministry of Education and was on the faculty of the Bar Ilan University Department of Music in Tel Aviv before he joined the Department of Oriental Music in the Academy of Music & Dance in Jerusalem in 2001. He teaches music theory, performance for the violin & Arabic singing.
His publications include a book focusing on a with a new perspective for the methodology of teaching Arabic violin and three booklets on solfegge, auditory modality development and advanced Arabic singing techniques.
Appearing as soloist with numerous orchestras in Israel and abroad, Khsheiboun has appeared as a soloist with the Israel Philharmonic Orchestra  as part of the together with the “Shesh Beysh” ensemble,  composed of Jews & Arabs.
In 2005 Khsheiboun he received the First Prize for “Support & Excellence in Performance” at the International Oud Festival, Jerusalem.   He is invited to teach master classes and develops musical performances aimed to discover the talented youth for the Israel Broadcasting Authority.