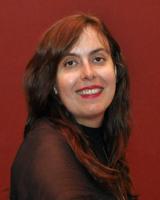 Ms. Sonia Mazar was born in Ukraine. She graduated with honors special music school for talented children in Kiev. Sonya has won numerous awards and has quickly garnered national acclaim as a rising star in the classical music world.
Ms. Mazar was finalist in the 1995 Israel Radio Competition and was semi finalist in the 1995 Bremen International Piano competition.

Sonya graduated with honors with both her Bachelor of Music and Master of Music Degrees from Jerusalem Music Academy. She hold her masters degree in piano performance in 1997 at the same year she is joining the stuff of Jerusalem Academy where she has opera class now.

In 2002 Sonia invited to work on the Summer Program in the Israel Vocal Arts Institute in Tel-Aviv directed by Joan Dornemann.
As a soloist and chamber musician she has performed throughout Israel, Italy, Franch, and Bulgaria. She is featured in recordings for Israel and Italian radio and TV. In 2010 new CD,dedicated for music of Francesco Paolo Tosti, has been released by Velut Luna recording Italian company. Now Sonia invited to record a new CD with contemporary music.

She is working with best Israel singers as Ira Bertman, Yotam Koen, Anna Verovlansky,Svetlana Sandler,Edit Zamir, Karin Hochman.
Sonia is regularly invited by international music festivals in Israel, Italian and French both a recital soloist and chamber musician.
Since 2005 Sonia joined to the staff of Tel-Aviv University as an opera class teacher.

Since 2005 she is invited by the Hebrew University and the Italian consulate to be Musical director of the project of statement of the Italian operas.

Since 2007-09 she was Musical director of the projects of performance in Bible Museum
In addition to her operatic work Sonya regularly appears in many concerts and international festivals with well-known Israel and foreign musicians and singers. Sonia has been invited by High Music School of Toronto and JerusalemMusic Center to perform in International Conferencein JerusalemMusic Center in 2011.