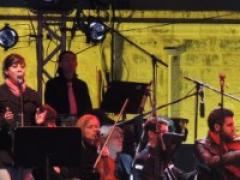 The focus of the Tanous-Greenberg Ensemble, established by the most generous donations of Mr. Alaa Tannous and Mr. Sidney Greenberg, is on bringing people closer through musical interaction taking place at the Jerusalem Academy of Music and Dance.

The Tannous-Greenberg Ensemble is comprised from students of all Academy faculties - those involved inclassical music, Arabic music and cross-disciplinary music programs. The orchestra will work on two programs a year, the result of collaboration between Academy students of instrumental playing, composition and conducting and students of Arabic music. Each concert will include both classical orchestral music and classical Arabic music, worked on under the guidance of Academy faculty and produced by the orchestra’s students as players, composers and conductors.

The Ensemble is engaged in a variety of activities: conducted rehearsals, the reading orchestration assignments and work on chosen repertoire. Its aim being to help players progress in the art of orchestral playing. Every week, the orchestra will be meeting for a three-hour-long rehearsal. At times, when preparing for concerts, extra rehearsals will be added.

The orchestra’s first concert took place at the opening of the Nazareth Christmas Market Festival: there, it playes pieces by Mohammed Abdel Wahab, Mohammed al-Kazbegi and songs of Fairuz alongside Beethoven’s Symphony no.8. Academy students conducted the orchestra.

Read more about the new Ensemble »