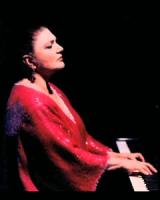 Oxana Yablonskaya is an American-Israeli pianist who has an active international performance career since the early 1960s. She began her career in the former USSR and, although winning several important competitions in the West, was denied permission by the Soviet government to accept any performance engagements outside the Soviet bloc. Frustrated by limitations of her freedom ,she emigrated to the United States in 1977. Described by The New York Times as an "internationally known virtuoso" and "one of the country's most distinguished musical residents", Yablonskaya has toured in concerts and recitals throughout the world and has made numerous recordings. She taught as a member of the piano faculty at the Juilliard School for more than 30 years, until 2009.

Born in Moscow into a Jewish family, Yablonskaya was a pupil of pianist Anaida Sumbatyan at the The Moscow Central School for the Gifted where she studied from the ages of six through sixteen. She then pursued further studies at the Moscow Conservatory with legendary Alexander Goldenweiser and became a first student of Dmitry Bashkirov, whom Goldenweiser just invited to teach as his Assistant. She was a student of Tatiana Nikolayeva in her Doctorate program. After graduating from the conservatory in 1965, she joined the school's piano faculty. She went on to win top prizes in the Marguerite Long-Jacques Thibaud Competition in 1963, Rio de Janeiro Piano Competition in 1965 and the Vienna Beethoven Competition in 1969. Yablonskaya was invited to perform as soloist and with orchestras in concert halls in the West during the 1960s and 1970s, but was never allowed to accept invitations. She performed throughout the USSR and made numerous recordings on the Melodya label. She was named a "Soloist of the Moscow Philharmonic" and was highly active as a soloist with the Bolshoi Orchestra.

In 2016 Prof. Yablonskaya immigrated to Israel, where she now teaches at the Jerusalem Academy of Music and Dance and continues to dazzle audiences throughout Israel and abroad.