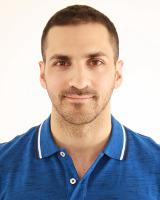 Born in Fassuta, 1988. Since his early childhood, he has been attached to the magical tunes of folk, art and liturgical music, together with his communion with the spectacular nature of the pastoral village in which he was raised and absorbed its natural and urban beauty. At the age of 5 he began learning to play the (electrical) organ, and brief period afterwards the Arabic drum. His musical talent began sprouting at his youth, and accordingly occupied a prominent part of his mental and emotional life. At the age of 11 he learned to play classical piano for 3 years, and immediately afterwards to play ‘ūd for almost a year.

Nowadays he works as a lecturer of theoretical courses on Arab music at the Jerusalem Academy of Music and Dance, Birzeit University, and as a research assistant at the Jewish Music Research Center at the Hebrew University.

He composed a few instrumental pieces, such as samā‘ī, modern piece, etc. In addition, he infrequently performs on the ‘ūd on small stages and in intimate gatherings, which function as super stages for performing classical Arab music.